Starting off the event with high energy and celebratory songs throughout the two sessions (morning and afternoon), Botho University Choir set the tone for the 25th Anniversary launch for staff and students held on Tuesday 26th April 2022. The exciting programme was attended physically and virtually by Senior Management, staff, and students in the Botho University (BU) Multi-Purpose Hall, Gaborone and broadcasted virtually across all campuses; Eswatini, Namibia and Maseru.

The Vice-Chancellor and Managing Director, Dr Sheela Raja Ram, delivered a spirited address for both sessions to mark the Silver Jubilee of BU, celebrating 25 years of providing high-quality education across the SADC region and the rest of Africa. Elated crowds of staff and students graced the event, where Dr Raja Ram expressed sincere gratitude to staff and students for their contributions over the years.

The Vice-Chancellor highlighted all the key milestones BU has achieved, including collaborations with different universities globally, such as KTH Sweden, Asheshi in Ghana, and the University of Venda. She further added that BU ensures that employability is at the centre of everything that the institution does. Botho University continues to shine from the rest especially being a leader in technology and Digital Transformation; when the pandemic hit, virtual teaching and learning seamlessly continued.

The Vice-Chancellor was delighted on the outcomes of BU putting employability at the centre of everything, which has garnered interest from the World Bank organ, International Finance Corporation(IFC). The IFC conducted an Assessment in November 2021, which gave BU an employability score of 77 % putting the institution on par with other peers who focus on employability.

In his welcome remarks, The Chairperson for the BU 25th Anniversary Committee, Golekanye Setume beautifully captured how the 25th Anniversary was a Silver Jubilee that symbolised the brilliance and shine of BU since its inception in 1997. He celebrated the humble story of BU and its tremendous growth over the years and now has produced over 10,000 graduates who work in various sectors of the economy.

Staff and students were equally engaging the programme as the morning session the programme was hosted by Tebogo Matebesi from the Faculty of Business and Accounting, and the afternoon session was hosted by Phatsimo Mosimanegape from the Student and Alumni Affairs department. Mosimanegape paid tribute to the late student, Dumisani Dirao who studied BSc (Hons) in Electrical Engineering.

During the sessions, the Student Representative Council (SRC) President, Sophie Kegaisamang unveiled the 25th Anniversary logo which envisions BU’s strong heritage as well as charting future aspirations. Joseph Gwekwerere and Tebogo Khuting gave emotional closing remarks for the morning and afternoon sessions respectively, as they reflected on the journey of joining BU from its early start and how it has transformed them personally and professionally. 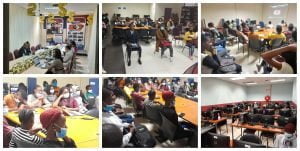 During the 25th Anniversary celebrations, other BU campuses, including Lesotho, Eswatini, and Nambia, embarked on a magnificent event that featured participation in a live session held in Gaborone. The lavish decor at the Eswatini boardroom and the library, where students were allowed to participate virtually, dazzled attendees.

The narrative delivered while unveiling the 25th-Anniversary logo captivated Maseru students and staff alike, highlighting the core values that the university aspires to uphold. In Namibia, the atmosphere was the same. The celebration of BU’s 25th Anniversary was a joyous occasion for both students and staff. A strong feeling of togetherness and excitement pervaded the campus. Overall, the event was a success on all campuses, and everyone had a good time.